Synopsis: The tree of Ténéré is a tree in the middle of the Sahara Desert that for a long time was considered the most solitary and isolated tree on Earth.
But the tree of Ténéré was not always alone. Millions of years ago, on that same spot, right where the tree is, there were other trees just like it, as well as plants, wild animals and water. Especially water.
Our tree of Ténéré loves to remember that time, and it also likes to dance and sway in the wind.
It is even visited by Tuareg caravans in the middle of the night, and by sun-weary walkers looking for a bit of shade under its branches.
The story of our tree of Ténéré is a tale of roots, light and shadow.

Company: La Negra is a theatre company created in 2017 by the actor and producer Carlos Amador with the aim of creating theatre for children and young people that talks about different, lonely or outcast people through the use of poetic and visual language and a contemporary theatrical approach that is developed through experimentation and reflection.
Its first show ‘En Las Nubes’ (In the Clouds) opened at the Sueca International Mime Festival in 2017 and has since been performed at festivals including FIET in Mallorca, the Vall de Albaida Puppet Festival and FETEN in Gijón.
‘Nautilus, 20.000 Leguas de Viaje Submarino’ (Nautilus, 20,000 Leagues Under the Sea) was its second proposal, and it has received many accolades such as the FETEN award for its originality and environmental awareness, as well as the “R” for recommended production from the national network of theatres and the award for best show at Titirimurcia. 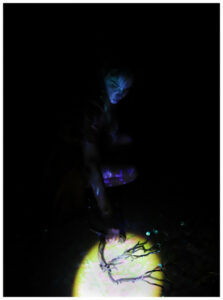